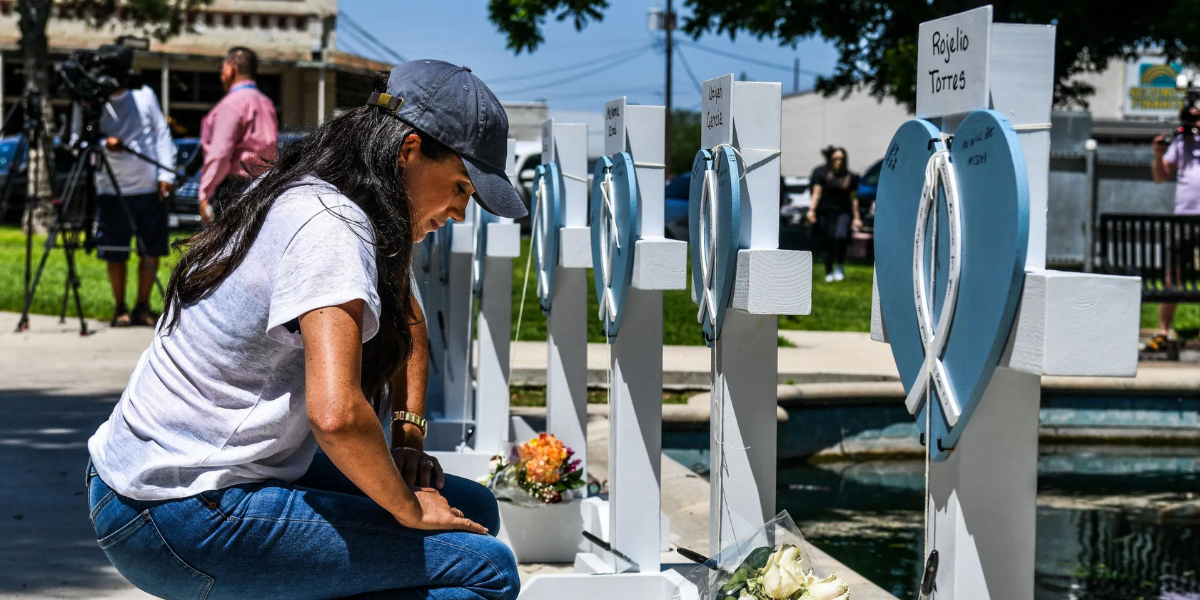 The Duchess of Sussex emotionally paid tribute and offered flowers at the Texas school where 19 children and two teachers were killed in a massacre.

Meghan Markle laid a bunch of white roses with a purple ribbon at a line of crosses in Uvalde dedicated to the victims.

According to the Los Angeles Times, the flowers were placed near Uziyah Garcia’s cross, which had the words “you will be missed” written on it.

The duchess made the journey as a mother, according to her spokesman, because she wanted to express her sympathies and support in person.

Meghan was not accompanied by her husband, Prince Harry, who lives in Montecito, California.

On Tuesday, Salvador Ramos, an 18-year old high school dropout, went on a rampage at Robb Elementary School killing two teachers, and a total of 19 elementary aged between 7 to 10. It was the bloodiest school shooting in the United States in in a decade.

They want a gun violence tsar named and an executive order on background checks for gun purchases issued, among other things.

While President Biden has pledged to press for tougher gun regulations, the White House prefers that Congress act first in order to have a greater impact than executive action alone.

The Duchess of Sussex travelled to convey her sympathies as a mother, according to a spokesman for People.

With both of their children, Harry and Meghan will attend the Queen’s Platinum Jubilee celebrations next week.

It will be the Queen’s first meeting with her 11-month-old great-granddaughter Lilibet, who bears her name.

“Prince Harry and Meghan, The Duke and Duchess of Sussex, are excited and honoured to attend the Queen’s Platinum Jubilee celebrations this June with their children,” a representative for the pair said.

RELATED ARTICLE
U.S. Visa of Prince Harry Now ‘At Risk’ After Admission of California Drug Abuse for His Memoir