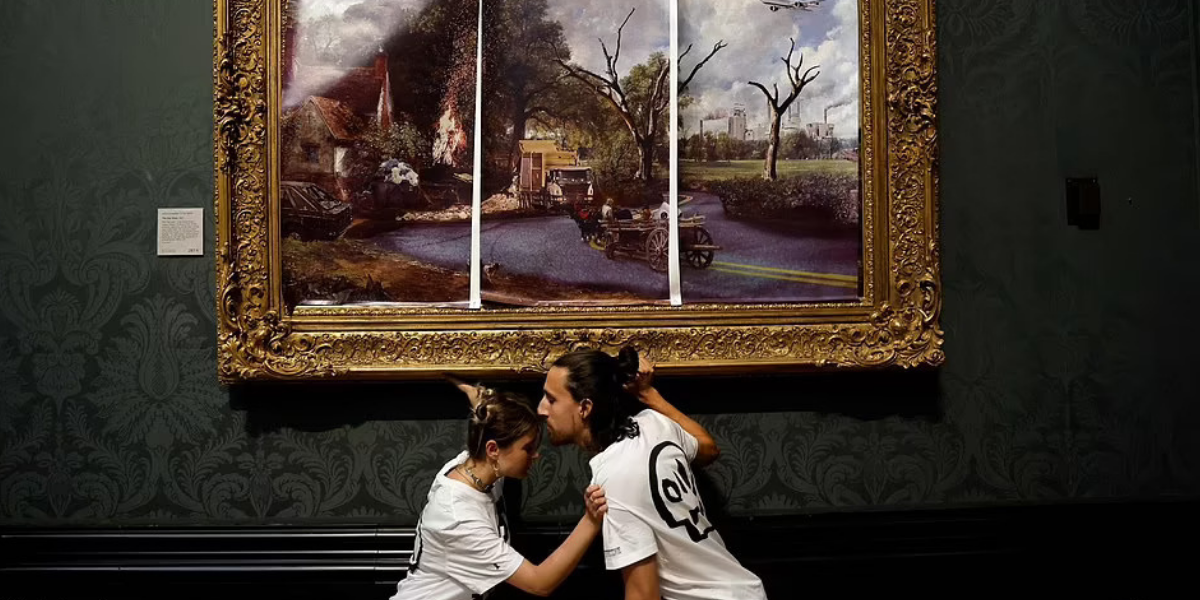 With their hands stuck to the masterpiece dubbed as one of the “greatest and most popular English paintings” ever, the protestors, who claimed to be a couple, yelled their demands for the government to stop new oil and gas extractions.

Hannah Hunt, a 23-year-old student activist, yelled to bystanders, “Yes my hand is glued to this painting but there is blood on the hands of the government.”

Police have been called to the exhibit, which has been off-limits to the public, according to a National Gallery spokesperson.

The six-foot Hay Wain (1821), widely regarded as John Constable’s most well-known landscape, depicts a bucolic country scene with a waggon in the River Stour in Suffolk.

The activists also added a reinvented version that “depicts a nightmare scene that demonstrates how oil will destroy our countryside”.

The group said in a statement: “The river has gone to be replaced by a road, airplanes fill the sky, pollution belches from cities on the horizon, trees are scorched by wildfires, an old car is dumped in front of the Mill and the famous Hay Wain cart carries an old washing machine.”

Ms Hunt, a psychology student from Brighton said: “I’m here because our government plans to licence 40 new UK oil and gas projects in the next few years.

“This makes them complicit in pushing the world towards an unliveable climate and in the death of billions of people in the coming decades.”

Eben Lazarus, another activist, identified himself as an art enthusiast.

He said: “Art is important. It should be held for future generations to see, but when there is no food what use is art.

“When there is no water, what use is art. When billions of people are in pain and suffering, what use then is art.”

He added: “We have covered the Hay Wain with a reimagined version that illustrates the impact of our addiction to fossil fuels on our countryside.

“The painting is an important part of our heritage, but it is not more important than the 3.5 billion men, women and children already in danger because of the climate crisis.”

According to a National Gallery spokesman, the room was locked and police were called. They said later: “The painting was removed from the wall to be examined by our conservation team. The Hay Wain suffered minor damage to its frame and there was also some disruption to the surface of the varnish on the painting – both of which have now been successfully dealt with.

Similar demonstrations by Just Stop Oil campaigners have been held in the previous week at art galleries in Glasgow, Manchester, and London. Yesterday, a handful even sat down on the Silverstone racetrack during the British Grand Prix.