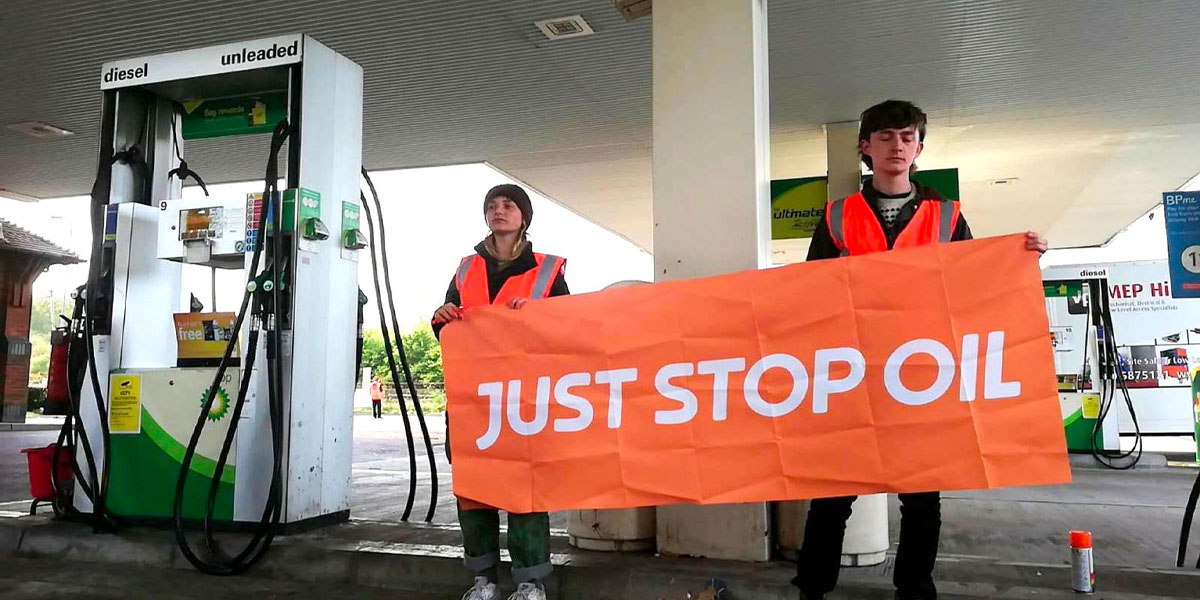 Just Stop Oil has created yet another interruption to fuel delivery ports around the country, claiming that this has resulted in severe gasoline shortages. Since the beginning of April, the gang has blocked and trespassed on 11 petroleum facilities in England to prevent tankers from arriving, loading up, or departing to provide fuel.

The group is a youth-led offshoot of the Extinction Rebellion that wants the UK government to put a stop to all new fossil-fuel projects in order to tackle climate change.

They think that moving away from fossil fuels will reduce energy costs while also allowing us to achieve our international climate commitments.

Chaos: To be Continued, and Continued

Just Stop Oil, which began protesting in early April, has staged a series of petroleum terminal blockades throughout southeast England and the Midlands, as well as targeting a number of high-profile football events.

One gang was shackled to a pipe at the country’s third-largest petroleum station in Grays, Essex.

Blocking the forecourts at Cobham and Clacket Lane services in Surrey and Kent at 7 a.m., 35 supporters damaged exhibit glass and smeared it with spray paint, preventing cars from entering. Protesters also attached themselves to the asphalt and damaged gas stations before bragging about causing havoc.

After shutting down two M25 gas stations for seven hours, police were able to remove the eco-anarchists. Surrey Police said that 40 officers had evicted the protestors from the forecourts at 2:00 p.m., but they are again facing questions about why they did not act sooner to remove the group, which has pledged to continue creating chaos to cars in the coming weeks.

To remove the demonstrators, the police department stated it would have to employ specialised de-bonding equipment.

Louis McKechnie, 22, led the effort, having already served a month and a half in prison for blocking the M25 last year. Insulate Britain has routinely blocked the M25 crossroads, and the group’s methods are identical.

As the name implies, the organisation is calling on the government to halt all new fossil fuel supply projects including future licensing, and consent for the exploration, development and production of fossil fuels in the UK immediately.

One of the activists, Nathan McGovern, said: “I refuse to stand by and watch as heatwaves and drought murder people across the global south and families in the UK are forced to choose between eating and heating. If politicians and bureaucrats refuse to act then it falls on ordinary people to do what they will not.”

The group say they will “continue the disruption until the government makes a statement to end new oil and gas projects.”

Motorists retaliated by slamming the “clueless” activists and pleading with the government to “please get on top of this situation” to avoid additional public inconvenience.

“We’re doing this because our government is refusing to act on the climate crisis and we need to have a meaningful statement that we will have no new fossil fuel projects, it’s that simple,” said one activist who gave his name as Nathan, in a video filmed from the Grays terminal and published on Twitter.

Just Stop Oil launched its campaign on April 1 with blockades at ten oil ports in Birmingham, Warwickshire, Hampshire, Essex, and London. The organisation intended to sabotage gasoline delivery, especially in the southeast and London.

While merchants claim that the demonstrations are “not having a significant impact on delivery,” there have been “dozens” of local complaints of pumps “running empty,” with shortages recorded in Oxfordshire, Cambridgeshire, Lincolnshire, Staffordshire, Kent, and Warwickshire.

Official numbers later revealed that supplies to petrol stations fell by 43% in the West Midlands, 44% in London, and 48% in the east in the three days after the commencement of the protest.

After the arrest in M25, Justice Secretary Dominic Raab, the MP for Esher and Walton, tweeted: “Thank you to the police for responding to this outrageous behaviour in Cobham. We will not allow militants to sabotage people’s lives. That’s why the government reinforced the law to allow the police to take the necessary action – which Labour and Lib Dems opposed.”

The government has said that while it recognises the protest group’s “strength of feeling”, it condemns its “guerrilla tactics that obstruct people going about their day-to-day business”.

Home Secretary Priti Patel added that “hard-working people across our country are seeing their lives brought to a standstill by selfish, fanatical and frankly dangerous so-called activists”.

Environment Secretary George Eustice similarly criticised the protests as “not just making a point” but “trying to cause havoc with other people’s lives”.

However, the protesters have said they will continue taking action until a ban on all new fossil fuel projects is agreed upon by the government.

A letter to Boris Johnson, read out at Downing Street on Tuesday morning by two Just Stop Oil campaign supporters, said: “The bill for oil and gas is already being paid by millions around the world, in the global south, and can now also be seen in blood and suffering in Ukraine.

Another activist also shouted, “Our Government and judicial system have now effectively outlawed peaceful protest. Is this Russia, is this China? No, it’s the UK.”

Just Stop Oil’s activists have vowed to continue their campaign until the government agrees to a ban on new oil and gas extraction projects, or until they are all jailed.

According to Just Stop Oil, more than 1,000 arrests have been made.

Fuel prices in the UK have reached record highs in 2022, with the average price of petrol hitting 161.80 pence per litre (ppl) and diesel reaching 176.50p today.