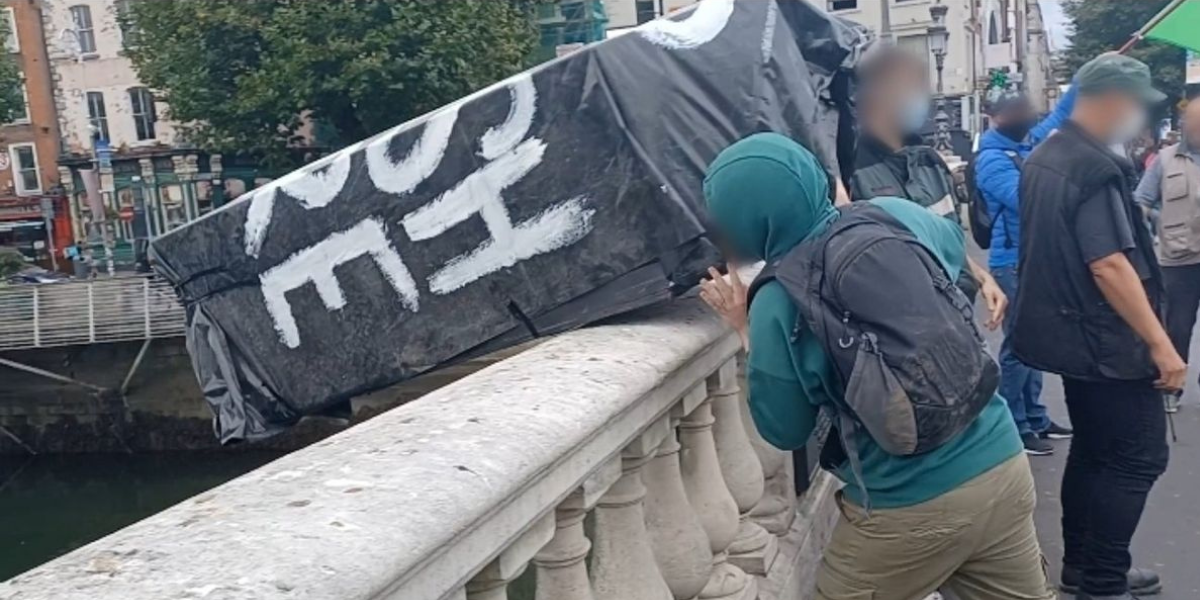 While Britons mourn the death and funeral of the Queen, anti-monarchy protesters in Ireland threw a coffin labelled “RIP British Empire” into a river.

The action was carried out by Anti-Imperialist Action Ireland, which held a protest march through Dublin at the same time Queen Elizabeth II’s funeral took place in London.

During the march, some participants stopped to throw a coffin into a river that runs through the Irish capital.

The stunt is said to be a recreation of an action carried out in Dublin in 1897 by former socialist leader James Connolly during a visit to the city by Queen Victoria, the late monarch’s great-great-grandmother.

“This afternoon, Anti Imperialist Action organised a protest march starting at the James Connolly Statue at Beresford Place and marching around to the GPO, against the Free State ruling class’s grovelling worship of the English Monarchy,” the group wrote on Twitter.

“Along the march, a coffin marked “RIP British Empire” was thrown into the Liffey at O’Connell Street, just as James Connolly did in 1897 to protest the visit of Victoria.”

The marchers chanted slogans such as “You Say British King, We Say Guillotine!” and “Get the Brits Out Now!”

“There was a heavy police presence throughout the protest, with three riot vans, a surveillance van, and members of the Special Branch and National Surveillance Unit trying to intimidate the Revolutionary Republicans.

“The bowing and scraping from the likes of Michael D Higgins and Micheal Martin only highlight the continuing counter-revolutionary and semi-colonial nature of the Free State.

“Socialist Republicans will continue to oppose the normalisation of relations with Britain.”

Protesters also objected to flying the Irish flag at half-mast on the day of the Queen’s funeral.

The group claimed they were prevented from occupying the General Post Office building in the capital they had targeted because its flags were at half-mast.

“The Tricolour above the GPO is flown at half mast for the funeral of a foreign tyrant whose family brought nothing but misery to Ireland,” it continued.

“The Irish people have no interest in licking the boots of the English Royal parasites.”