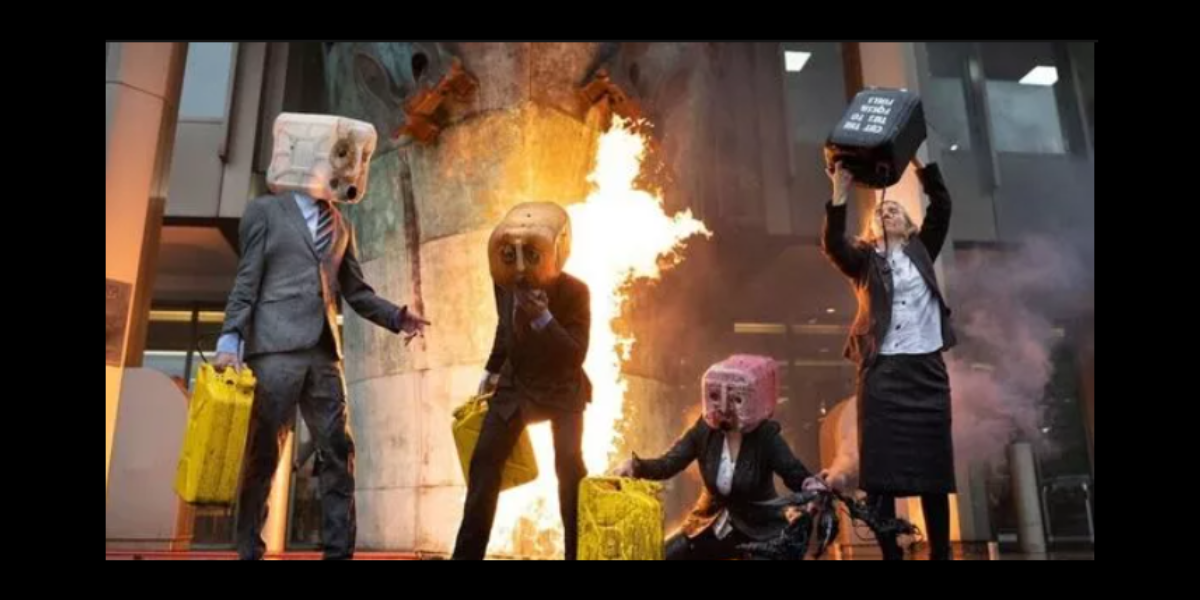 Extinction Rebellion set fire to a building in London, as the campaigners continue to target businesses in the capital in the UK.

Eco protesters calling themselves ‘Ocean Rebellion’ have staged a series of anti-oil demonstrations in the aftermath of the COP27.

Performers dressed in suits and wearing cardboard masks vomited fake oil over 13 locations, one of which appeared to catch fire. The group’s targets included organisations associated with the fossil fuel industry.

Yesterday, however, they staged their most dramatic protest outside the International Maritime Organization, the only United Nations specialised agency headquartered in the United Kingdom.

Protesters gathered outside the building, clutching cartons of liquid and throwing them around the entrance.

Oil was represented by black liquid splattered around, which some participants vomited from their masks.

A fire raged up the stern of a seven-metre-tall bronze sculpture depicting the bow of a cargo ship.

Rather than setting fire to the sculpture, the organisation had placed a hose producing flames in front of it.

“No more fish in the sea,” one sign said, while another warned, “As the sea dies, we die.”

Extinction Rebellion spokesperson Sarah Hart stated that the organisation is “sending the message that it’s time to cut the ties with fossil fuels or lose the social licence to operate in the UK.”

Overfishing, according to another spokesperson, Suzanne Stallard, is “one of the most serious threats to our Ocean.”